Instructors who want to make audio podcasts or other audio content available to their students may think they need computers, digital recorders and microphones to accomplish the task, but may overlook the simple solution of using their smart phone’s memo feature or free software that is available.  While the available Voice Memos that comes with ios7 can be used, I would suggest downloading the free app “Voice Record Pro (HD)”, which has more useful features.  This review will concentrate on this Apple-only app, but there are also good solutions for Android users as well.  One notable Android app is “Smart Voice Recorder”.

Besides ease of use, Voice Recorder Pro’s most important feature is the capability to convert from the Apple-specific format (AAC) to the more widely used MP3.  When you complete your recording, you can easily email it to one of the college’s multimedia specialists, who will post it to the streaming server and send you a link to go in Blackboard.  It’s as easy as that.

When you open up Voice Record Pro HD, tap on the red REC button to bring up the record quality interface and choose from low, medium and high.  Tap the REC button again to start the recording.  A large VU meter will appear and while speaking, the level indicator should approach the red 0 mark.  When recording, position the phone as close to your mouth as possible.  This may be done by stacking books or other items on a table in front of you to bring your phone up higher.  You can record straight through or you can pause and start again when you want to.  When you finish the recording, touch the stop button and you’ll see a screen with many options such as play, convert to MP3, send by email, change title and edit.  Use the edit/trim feature to delete blank space before and after your audio content.  If you’re happy with the recording, title it, convert it to MP3 and email it to us for posting.

Here is a quick summary of the directions:

There are many other voice recording apps available, but no cost, ease of use, mild editing capability, quick conversion to MP3 and good audio quality make it one of the best choices. 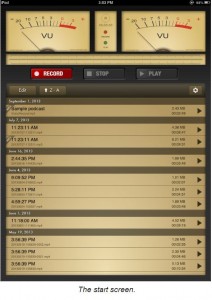 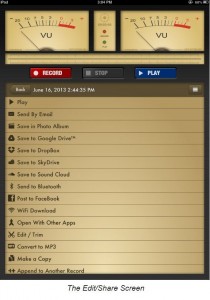 Selecting music is one of the most enjoyable aspects of developing your own multimedia, whether you’re creating a video or an audio-only file.

In the face-to-face classroom, you can play a piece of music for your students or for colleagues. But creating a multimedia file that will be hosted on the web means considering issues of copyright. Some artists are happy to trade use of their music for the free exposure, particularly on a nonprofit, educational project, while others will demand payment upfront or that you sign a lengthy contract. Still more offer what is called “buy-out” or “royalty free music”; you pay once for the music, either as a single track or as part of a collection, and then may use it repeatedly. The main drawback is that you’ve got to pay up front.

Fortunately, there are several excellent resources you can use to find free music, and other music pieces with simple, free licenses:

Public Domain items have been completely released to the public under U.S. copyright law, or are items whose copyright expired years ago. However, just because the underlying piece of written music is in the public domain, such as a Strauss waltz or an etude by Chopin, that doesn’t mean that a performance is in the public domain. A recording of Willie Nelson singing “Cotton-Eyed Joe,” a traditional folk song, is copyrighted as far as Nelson’s specific performance. But if you wanted to sing the song yourself, you would not owe Nelson any royalties or need to arrange a licensed use — unless he had substantially changed the song into a new copyrighted work, for instance, the way that “Aura Lee,” another folk song, gained new copyrighted lyrics, better known as Elvis Presley’s “Love Me Tender”. The melody is public domain; the lyrics are not, and neither is Elvis’ recording of the work.

Happily, there are some pieces available online that are public domain in every respect – both the melody, lyrics and performance. Usually it is an extremely early piece of music, or a musician has made a specific effort to release her or his work freely to the public.

One such site is Musopen, which has many pieces recorded by choirs and small orchestras: the full list can be accessed here. Keep in mind that anyone can upload music to Musopen; you’ll need to use judgment about whether the underlying sheet music or performance is truly public domain. If you find a performance of a modern, popular tune like “Ice Ice Baby” by Vanilla Ice (which was uploaded at one point to Musopen), it’s unlikely the artist suddenly decided to make it available for free. Similarly, if you see a performance of “God Bless America,” or any other song published after 1923, the underlying sheet music is very likely to be copyrighted even if the performer calls it a public domain performance. Stick with music created by composers who come from the 19th century or earlier. 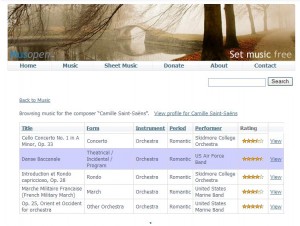 Are you a performer? Or do you know a student performer who is willing to sign a release and make his or her work freely available on the Internet? (Many young performers are looking to build credits, especially at the college and high school level.) There is a treasure trove of public domain printed music available online: the Library of Congress excerpts some of the Duke University collection (over 3000 songs and pieces), while much more is available at the Lester S. Levy Collection at Johns Hopkins, and also at the Choral Wiki.

If you are handy with software, much more public domain music is hosted at the Wikimedia Commons, a repository of media files provided by the Wikimedia Foundation, which also publishes Wikipedia. There is much more than music available; other sound files, like recorded speeches, audiobooks, and sound effects can also be found here. However, it is organized haphazardly, built for frequent editors of Wikipedia, and most of the pieces are encoded in a format called Ogg Vorbis.

Help with playing Ogg files is provided by Wikipedia; if you are familiar with the open source recording software called Audacity, you can edit Ogg files with that tool.

Again, before using any piece from Wikimedia Commons, look carefully at the underlying license to clarify that it is public domain in all states, under American copyright law. You may also see that it is licensed under “Creative Commons”, which will be covered at length in a future post.