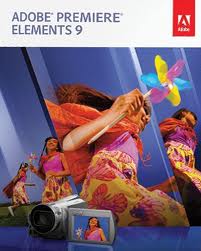 When faculty and staff members ask about video editing software, I have steered them towards Windows Movie Maker because all Windows-based computers have it, it does an OK job and it’s free.  The biggest downside for Windows Movie Maker is that it’s not compatible with every video file type that is generated by consumer cameras, so the shooter may have to use whatever proprietary software that was packaged with the camcorder. This software will probably be very limited and may only allow a video to be transferred to a DVD.  Even if you are able to import your video into Windows Movie Maker, the output options are extremely limited.

For people with newer, more advanced camcorders or high-definition Flip or cell phones, I’ve suggested purchasing Adobe Premiere Elements which is a down-sized and simplified version of Adobe’s professional editing software, Premiere Pro.  I recently downloaded a trial version of latest release of Premiere Elements and put it to the test.

Frankly, I was wowed by its power and versatility!  The complexity of the interface is reduced to make it easier for novice editors, but the functionality is nearly the same as the pro version.  Instead of a dropdown menu where you have to click “File/import”, there is a big, obvious tab labeled “Get Media From” and instead of “File/Export”, there is a tab named “Share” which gives you many options for exporting to DVD, YouTube, Facebook, mobile phones and others.  The default editing interface is called the Sceneline which looks similar to other novice interfaces, but there is a prominent tab that instantly converts it to a “Timeline”, which is the preferred standard for all professional editing programs.

There are many automated features that simplify things for the novice editor and a useful tool named “Smart Fix”, which can help remedy problems with camera shake, lighting and color balance.  You can accept the recommendations then fine tune them further if desired.  There are also many audio features for fixing problems, including audio polish, auto mute, cleaner hum remover, noise fader and noise reducer.

As I edited, I found that Adobe included all of the keyboard shortcuts that are found in Premiere Pro.  I think that this software developer’s rational is great, because if a person wants to pursue video editing to the next level, the transition from Elements to Pro will be much easier.  I would even venture to say that a video professional, say in the wedding video business, could manage with Elements 9 without going to its big brother.  The stand-alone version of Premiere Pro 5.5 is $350 for the academic version and $800 for the commercial version, whereas the street price for Elements 9 is closer to $75.  I even saw a rebate offered that would bring the price down to $55!  Also, if you don’t have a photo-editing solution, you can add Adobe Photoshop Elements 9 in a bundle for under $100.

Have you ever thought about finding ways to save paper while still maintaining accurate records, signatures, time stamps, etc.? Here is an easy way to keep records without needing to print and file lots of paper…

By creating an interactive form in Microsoft Word or Excel, it can be converted to an interactive PDF using Adobe Acrobat. This file format allows students to fill out forms on a computer or online and send the form electronically to an instructor or the necessary destination. These electronic forms can contain text fields, check boxes, radio buttons, and drop-down menus. The forms can be saved, printed, or emailed. By using these interactive PDFs, record keeping becomes easier to maintain and requires much less printing.

Adobe Acrobat has the ability to create digital signatures which are password protected and therefore secure against forgeries. By creating a PDF from a Word Document or other electronic file, add a field for a digital signature. By adding this field, users who are filling out the form are prompted to add their digital signature to verify that they are the ones filling out the information. Digital signatures are unique to a specific person, and can be created in a few short steps. A common problem in large classes is having classmates sign in on the attendance log, allowing for students to skip class. If your course involves off-site attendance, this can be a viable alternative. Each digital signature is password protected and must be carried on a flash drive by students. This safeguard will help deter students from cheating on attendance logs when off-site for a clinical or observation.

For more information on how these interactive PDFs have helped decrease paper waste, contact John Goins with the Automotive Technology department.

Feel free to contact an Instructional Designer for more information on how to create interactive PDFs and find out how they can help reduce your carbon footprint!